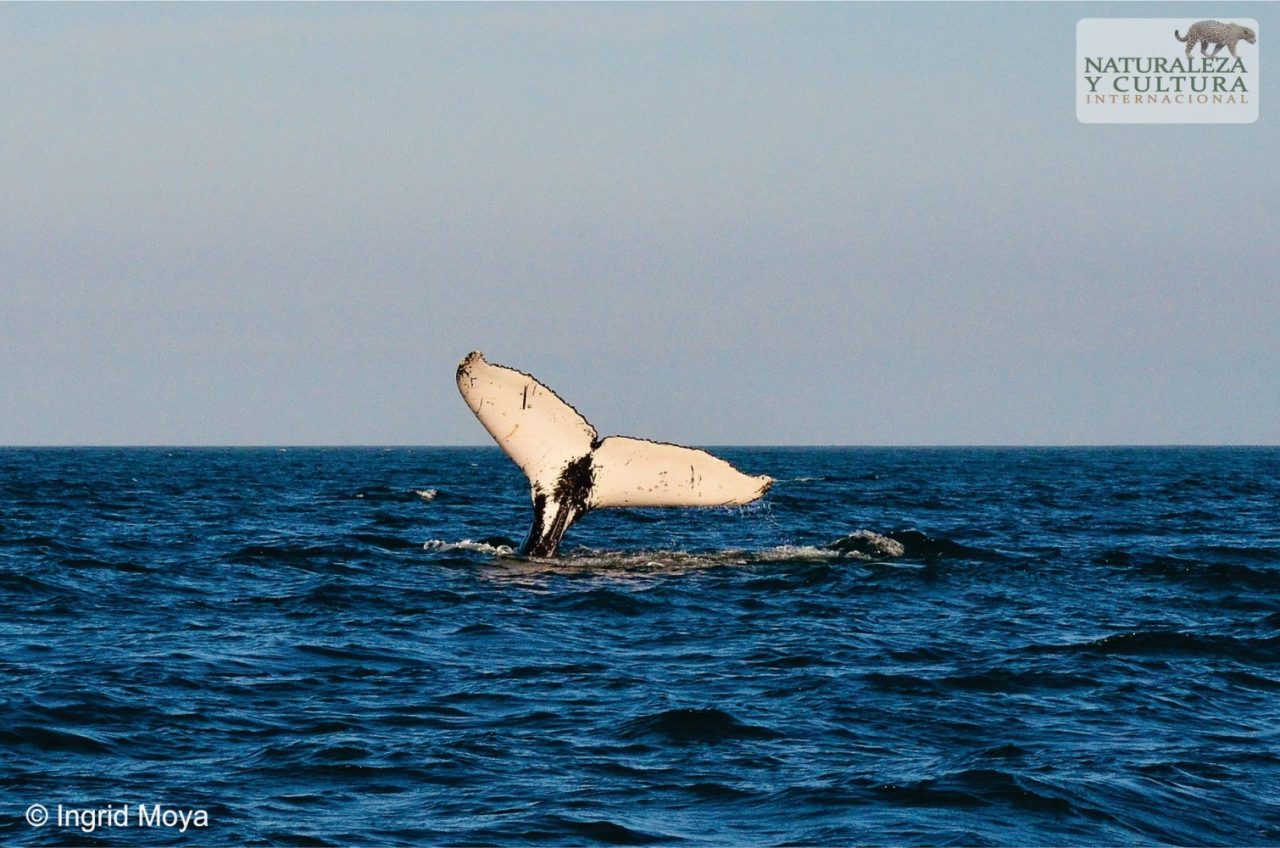 This month’s mammal is over-whale-ming!

Today – on World Whale Day – we marvel at the oceans’ most iconic mammals.  Join us in celebrating a serenader of the sea….

A giant creature leaps from the ocean’s surface off the coast of northern Peru. About the size of a school bus, the animal is surprisingly acrobatic, jumping out of the water, turning belly up, arching back and diving back in.

The magnificent humpback whale (Megaptera novaeangliae) – or ballena jorobada in Spanish – is one of the largest species of baleen (or toothless) whales. Its flippers alone can grow up to 16 feet long, which is the largest appendage in the world, and its tail can measure 18 feet wide.

Black on the upper (dorsal) side and mottled black and white on the under (ventral) side, the shape and color pattern on the ventral side is unique to each individual whale, like human fingerprints. Contrary to popular belief, humpbacks do not typically have a hump on their back; the name comes from the large hump that forms when they arch their backs before making a deep dive into the ocean.

Humpbacks can grow to 60 feet long, and they can weigh a whopping 40 tons

Humpbacks are found near coastlines, feeding on krill, plankton and small fish. The species migrates farther than any other mammal on Earth. Each year they migrate from summer feeding grounds near the poles to winter breeding waters closer to the Equator. Many give birth to calves and rear their young in the warm waters of northern Peru, off the coast of Piura.

The whales are powerful swimmers, using their massive fin (called a fluke) to propel themselves through and above the water. They are also known for their haunting songs, which travel for great distances through the world’s oceans. The complex sequences of cries, howls and other noises can continue for hours on end. Scientists are studying these sounds to decipher their meaning, but it is most likely that humpbacks sing to communicate with each other and attract potential mates.

These massive mammals play an important role in our oceans. They balance the food chain and ensure that certain animal species, such as krill, do not overpopulate the ocean. Humpbacks also act like a pump that recirculates the fish and zooplankton that they’ve ingested toward the ocean’s surface in the form of nitrogen-rich fecal matter. Humpback tale off the coast of Piura, Peru

As recently as 1988, humpbacks were listed as endangered by the International Union for Conservation of Nature. Populations have now recovered, due to the introduction of commercial whaling bans. However, like other large whales, humpbacks may be harmed by pollution, ships and entanglement in fishing gear. Offshore oil and gas development is also a serious threat.

Nature and Culture International is working to provide a safe haven for humpbacks near Piura, Peru. We’ve joined forces with Peruvian fishermen and local communities in an effort to establish the Grau Tropical Sea National Reserve, conserving habitat for humpbacks and other species, and protecting threatened artisanal fishing activity for around 5,000 families.

Join us in protecting humpback whales and mammals across South America. Support Nature and Culture today.